Angie Lavalla is a costume designer who has lived in New York City and Los Angeles, where she designed costumes for theater and film, respectively. She grew up in Vermont, did competitive figure skating in high school, hates ladybugs (ask her about it!), has her own line of wedding dresses, and currently helps lead worship at Church at the Well. I recently sat down with her at the Teddy Bear Factory in Shelburne, Vermont, where she works, to hear more of her story. 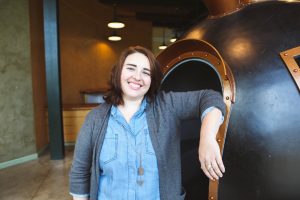 What sparked your interest in costume design?

My mom was a seamstress and clothing designer. She made wedding dresses, tailored uniforms for the local fire department, and made all of my clothes. So I grew up knowing how to sew. At UVM, I was pre-med, but I had a costume professor who did costume as a career, and that was really inspiring. When I had a junior year crisis, I realized I had enough credits to major in theater, and then, after graduation, I moved to New York City to apprentice. But I didn’t love the theater world and ended up designing for film in Los Angeles.

Tell me about a costume designing experience that proved satisfying for you.

I designed the costumes for a movie called Camp Takota. When I signed on, I didn’t know that the three lead actresses were really famous YouTube stars with tons of followers. When the actresses started posting pictures of themselves on social media wearing the Camp Takota T-shirts I had designed for the film, the demand for these T-shirts was so huge they became available for sale. I’ve run into people in LA wearing the hoodie I designed. (As the designer, of course, I never saw any money from it!)

I hear you don’t drink tap water, but that you harvest your drinking water from mountain springs. Is that true? Tell me about that.

When I was living in LA, working on a film, one of the actresses harvested her own water. I had started eating paleo, making my own beauty products—soap lotions, shampoo, conditioner, etc. I loved drinking something from the earth that’s clean and fresh, and my hair started growing shinier and thicker.

We are so fortunate to have good clean drinking water in this country, but clean is a relative term, and clean is different from natural. The FDA only tests for a small number of chemicals, and the levels they test for are arbitrary. Don’t get me on my soapbox! If anyone wants to try my mountain water, I will convert them! There’s an amazing spring in Middlebury.

Life hasn’t been easy for you. Last Mother’s Day, you shared what it was like to lose your mother at an early age. What got you through those difficult times?

It was a really rough road. I was twenty-three when my mom died. My little brother was still in high school, so I stepped into the mom role and didn’t have my own time to grieve. Then, when I moved to LA, I started reaching out to churches, pastors, and family members, and asking questions like, What are we here for? What happens after death? My grandmother was upset that I was going to all these different churches, but I learned so much. If you don’t have conversations with people who have a different faith, how are you going to figure out what you believe?

I didn’t turn to God and ask what my purpose was until I became involved as a volunteer with Young Life. That got me plugged into a church. God surrounded me with people who were supportive and wise, and I finally found time to grieve. God does not leave us stranded.

I love when you lead us in worship at Church at the Well. How did you end up on the Worship Team?

When I moved back to Vermont from LA, I didn’t want to just be a floater. I wanted to be a member of a church and community where, if I’m not there for a couple of weeks, people notice. Accountability was a huge piece. When I started to go to The Well and get to know people, God was telling me to get out of my wallflower mode. I felt like He was leading me to talk to Kevin about being on the Worship Team, but I was terrified because I knew Kevin would say yes. Then I realized, if I don’t do this, it’s going to happen eventually anyway. It’s been such a blessing getting to know people in the band and hearing their stories…and knowing that on most Sundays, they’re terrified too! 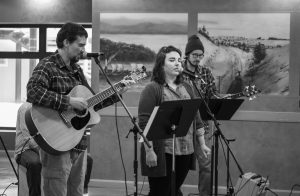 What do you enjoy about leading worship, and how have you grown as a worship leader?

I love looking out and seeing people worship. There are some criers in the group, and it’s so moving to me. I also love watching Mia, Aniyah, and Amelia dancing. But being a worship leader is also scary. You’re vulnerable. You’re not just singing, you’re leading. I’ve learned that it’s not a performance. When I prepare a call to worship, I know there’s someone out there God wants to speak to. I’m just the vessel.

Do you have a favorite Bible verse?

My favorite verse is James 1:2, Count it all joy. For me, it means no matter the situation, even if you’re at the darkest place in your life, you can see how God has walked with you. The difficulties and the happy times—they all shape who we are.