Colin Reardon, who helps lead worship at Church at the Well, moved to Burlington in June 2015, having grown up in a small town outside of Potsdam, New York, where he was homeschooled. After graduating at the age of sixteen, he studied veterinary technology at SUNY Canton. He strongly dislikes grammar, hopes to release a CD with his band, knows Psalm 19 by heart, and recently moved into an apartment with three friends—Chris, Ben, and Brent—whom he is enjoying getting to know better. I met up with Colin for coffee at New Moon Café to ask him a little more about his story. 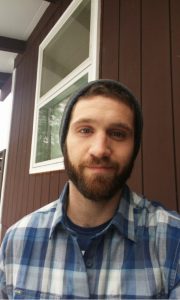 You clearly take a lot of joy in playing music. Tell me about how you got started.

I was tone deaf till I was about fifteen. Then I picked up a guitar, and the first song I learned was “Amazing Grace.” It just branched from there. Now I play close to eleven instruments, though not professionally. My main focus is guitar, but I also play bass, drums, mandolin, uke, banjo, piano, a tiny bit of violin, a little cello, some trombone—I even learned how to play a little bagpipes, but that didn’t last long!

What kind of music do you enjoy listening to?

Personally, I like opera, rap, death metal–all of it.

Tell me a little about your family. I hear they’re pretty musical.

I have six siblings, and they all play guitar. My dad’s been leading worship for over 35 years at New Hope Community Church in New York, and my sister Katlyn has by far the most beautiful singing voice I’ve ever heard in my life. My brothers wanted me to pick up a new instrument, and that’s where my passion branched out. Playing bass landed me a unique spot in my family. I started a band with my brother called “Bridge the Divide.” We played many shows together in different churches around the Northeast. We’re hoping to tour, maybe in 2018.

What was it like to be in a band with your family?

Being in a band with the family was great because it helped us build one another up, and it really reinforced in me a strong longing to follow God. I always had my father and my brothers as pillars for my faith, holding me up when I was down. When I was going through the ending of my engagement, my family was key. 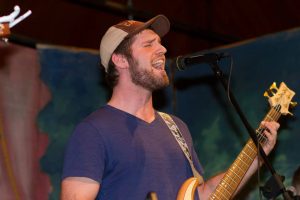 Tell me about a unique experience that has come from playing music.

I went to Africa with the drummer of a Christian heavy metal band. We were in Kampala, Uganda, during the riots in 2010. You could see the riots in the distance. Our compound was guarded with people with AKs. We built water reclamation units with the foundation Uganda Water Project.

What is something you learned from your time in Uganda?

One day we worked with the Kampala orphans, doing medical treatments. That was rough. They wear plastic bottles with twine on their feet for shoes. In Africa, to get rid of garbage, they burn it. One kid had run over a bed of coals with the plastic, which melted to the bottom of his foot and had to be ripped off and rubbed with alcohol. The kid was seven and didn’t cry.

When they ask you what you’ve learned from being in Africa, what everyone expects you to say is how fortunate you are. I most certainly learned that, but I learned that even in the hardest times, when people have it worse than you, their faith is strong enough to break through that tough time and come out like a piece of coal under pressure that is becoming a diamond.

I always enjoy when you lead worship at Church at the Well. What do you like most about being on the worship team?

What I love about it is working with the worship team. The comradery is really nice. It really feels like a team. I have had plenty of people in my life tell me I have a calling to be a worship leader, and I had never felt that, but coming to Vermont and actually being one of the worship leaders at The Well has made me feel more of a calling. 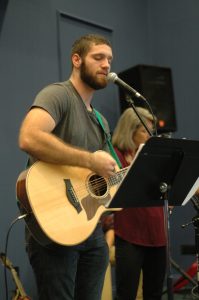 Colin Leading Worship At The Well

Can you tell me about a time when you saw God answer a prayer?

There’s been a lot of times, but here’s what pops into my mind. When my sister’s dog brought fleas into the house and my cat, Zombo, got fleas, my sister—bless her heart—was trying to help by applying medicine. Unfortunately, she used medicine strictly meant for dogs. In cats, the medicine causes tremors, discombobulation, hind leg paralysis, nausea, and death. Zombo started acting odd—he couldn’t go up and down the stairs. A normal cat would have died within twenty-four hours, but because of Zombo’s size (he’s a Bengal and weighs 20 lbs.), he was able to hold on for twenty-four hours. I took him to the emergency vet clinic, and they didn’t give me much hope—it had already entered his blood stream. But they did a water transfusion, and I just kept praying and praying. After two days, he made a miraculous recovery, and he’s now living with me happily.

Do you have a favorite scripture?

My favorite scripture is Psalm 19: The heavens declare the glory of God…. I grew up hunting, fishing, hiking, and biking. When we finished homeschooling at 2pm, we ran around outside for the rest of the day. This whole chapter is built on the glory of God and how amazing and omnipotent his power really is. It’s a good reminder of the kind of God he is. He’s Creator—everything gives him glory. As humans, we don’t give him glory enough.