This past December the folks of Church at the Well gave generously to raise money to build a well for those in desperate need of clean drinking water. We reached our goal of $5,000 to fund a water project and things are beginning to move forward. The water project will cost $10,000 total, but our $5,000 will go a long way to seeing the project fully funded.

The $5,000 we raised will be going to an organization called charity: water

charity: water is a non-profit organization bringing clean, safe drinking water to people in developing countries. We use 100% of public donations to directly fund sustainable water solutions in areas of greatest need.

Right now, 800 million people on the planet don’t have access clean and safe drinking water. That’s one in nine of us.

Unsafe water and lack of basic sanitation cause 80% of diseases and kill more people every year than all forms of violence, including war. Children are especially vulnerable, as their bodies aren’t strong enough to fight diarrhea, dysentery and other illnesses.

The money will go towards funding a water project in Kathmandu, Nepal.  Nepal “is located in the Himalayas and bordered to the north by the People’s Republic of China, and to the south, east, and west by the Republic of India.” The project will be overseen by their “partner on the ground” in Nepal, Splash. Splash has this to say about their work in Nepal:

The Kathmandu Valley has a population of over 2 million people.  That may not sound too bad until you consider density: with as many as 13,000 people living in each square kilometer, the population density of the Kathmandu Valley is mind-boggling—at least five times that of New York City.

While there are countless institutions serving children in Kathmandu, we made a strategic decision to focus our efforts on the city’s public schools. Of the more than 2,000 schools in the Kathmandu Valley, most are tuition-based private schools and can afford to purchase bottled water or pay for filtration. The government-run schools, by contrast, are poorly funded and, generally speaking, have the lowest quality water and worst hygiene practices. And they truly serve Kathmandu’s most vulnerable children—its orphans, child laborers, and kids from the city’s many slums. These are exactly the children who will benefit the most from clean drinking water and hygiene education, especially since neither are available at home.

We envision a day when every child in the Kathmandu Valley has clean water to drink—as well as improved hygiene practices—whenever they attend school. Putting vision into practice, though, is never easy. However, we are working hard at the strategy to ensure that every government school in Kathmandu (and there are more than 400!), will have clean and safe water. Meeting this goal will take a ton of heavy lifting initially by our organization, with additional and increased support by local government and businesses. But we are planning on 100% coverage of every poor student in Kathmandu by 2022. We will be close to 20% coverage in 2013.

charity: water will be updating our church on the progress of the water project throughout the 18 months it will take to complete. We will get major updates in 6 and 12 months. After 18 months we will receive a full report on the project, including GPS coordinates of the well’s location, pictures, etc. 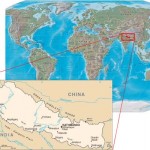 On a side note, Stacie Zellmer (School and Faith Liason at charity:water) said “(Church at the Well) is our most on-brand charity: water church partner!!!” How cool is that? And how appropriate that Church at the Well, in our first 6 months as a church, is helping to fund a well. Congratulations and a huge thank you to everyone who gave generously to contribute to this water project. Because of you, an entire community in Nepal is never going to be the same again. Because… water changes everything!

Water Changes Everything. from charity: water on Vimeo.